The Right Honourable Michaëlle Jean, chancellor of the University of Ottawa, and Allan Rock, president and vice-chancellor, are currently in France to strengthen University research and education partnerships. During their trip, they will meet decision-makers, researchers and key players in francophone communities and postsecondary education and have been invited as guest speakers at several institutions.

The University of Ottawa and the Université de Moncton are the only two universities outside of Quebec who are partners with the Centre Jacques Cartier and who will also participate in the 25th edition of the Entretiens Jacques Cartier. Within the context of this event, the Right Honourable Michaëlle Jean received an honorary doctorate from the École Normale Supérieure de Lyon. She also gave a keynote address on the Francophonie at the official opening of this event.

The University of Ottawa is a proud partner of the Centre Jacques Cartier and a member of the Fonds Jacques Cartier since 2008. It is deeply rooted in the French-speaking world and has thrived in both of Canada's official languages, French and English. It's wonderful to hear lively conversations in French and English on our campus, to see how our students enthusiastically embrace the possibility of learning and rubbing shoulders while switching from one language to the other. I consider this an example for all of Canada, Michaëlle Jean said.

The Entretiens Jacques Cartier is a series of symposia which is this year focused on four broad themes: economic, socio-political, scientific and cultural. The 25th edition will highlight University of Ottawa researchers, including professors Maureen McTeer, of the Faculty of Law, Common Law Section and François Rocher, Director of the University's School of Political Studies, who will lead symposia.

Strengthening our international relations through the Francophonie

The University of Ottawa's student population, which is made up of students from 150 countries, has more than doubled over the past decade, and has reached more than 40,000 individuals. In terms of mobility, France is the University's most important francophone partner. Over 70 ongoing agreements link the University with 64 French institutions of higher learning, including some that are among the top 200 in the world according to the 2012-2013 Times Higher Education World University Rankings. These agreements create opportunities for joint teaching and research in many fields, including science, the humanities and education. The University is also collaborating on student exchanges and research internships, and is exploring possibilities for exchange programs and joint degrees.

Michaëlle Jean and Allan Rock will use their time in France to meet students, professors, alumni and businesspeople in Paris and Lyon. For example, President Rock will give a lecture on the responsibility to protect doctrine to students of the Institut d'études politiques de Lyon. He will also speak to members of the Chambre de commerce France-Canada about how Canadian universities are engines of economic growth and innovation.

In addition to raising the University's international profile, this trip with consolidate its role as a leader in research, bilingualism and the student experience, all major objectives of its Destination 20/20 strategic plan. 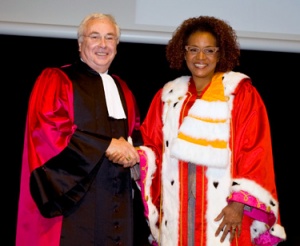 For the faculties of Arts, Education, Science, Engineering and Health Sciences:

For the faculties of Law, Medicine, Social Sciences and the Telfer School of Management:

For corporate issues & the University of Ottawa administration: